Some people’s names just sound the part. Like Keir Starmer. Which is obviously a classic socialist name from the late 1930s. So who wouldn’t want an ad campaign written by Glasgow copywriter Jim Marvyn Campbell? 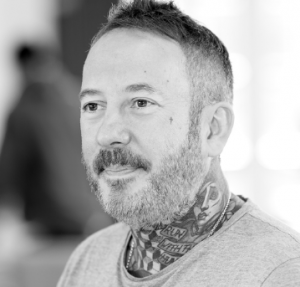 In 2004, I won an internship for Abbott Mead Vickers in London – a few others also won the opportunity. It was an introduction into agency life and working as a suit or a creative.

I was supposed to stay for a week, but they kept some people on – those who performed best, I suppose. I was paired up with a guy and we’d work as a team – by complete coincidence he’d been to the same school as me in Edinburgh.

They gave us dummy briefs to work on. We quickly deduced that having been at art school (I could draw better than him for starters), I would be the ‘art director’. He would write. But we were really just a team who did a bit of both. (I was convinced I wanted to be an art director, though.)

Then, to cut a long story short, after a brief stint with Batey Ads in Singapore, I nailed a job at the now-defunct but brilliant Clayton Graham Communications.

What did you do before copywriting?

Mainly bar work, DJ-ing at clubs, and basically bumming about. Plus I painted a lot. Ever since school I wanted to be a painter (not getting into Glasgow School of Art destroyed me). I ended up at Gray’s in Aberdeen though.

You’ve got design qualifications as well as being a writer? How does that work?

My degree was in Visual Communications. But I’ve never been any good with designing on a computer. Purely scamps. My ‘design’ was more hand-drawn illustration. And I write.

So are you your own copywriter/art director duo? Can you charge double?

Ha, would love to think so. For the time being I write and come up with a few initial ideas. I present my favourites to the client. Like I said, I’m useless with Photoshop and In Design. So no, I don’t charge double. But you could say you get more value for money.

You’ve been client-side as well as freelance? Which would you recommend?

I’d recommend to any wannabe creative starting out to strive for a role in an ad/design agency. Getting to know the big picture first is a must. Even better, get experience from more than just one agency. People say they’re all more or less the same. They’re not.

From my experience, there are more politics in agency life than on client-side. I wouldn’t recommend freelance unless you had quite a few clients on your roster (I currently don’t but am working on it; I’ve a few leads and hoping the new website will pull in a few more). Also, freelance is ideal if you’ve a 15-month old boy to take to and from nursery.

There’s a lot of debate about niching right now. Do you think it makes sense?

While working in an ad agency, it’s easier to ‘niche market’ as you’ve more than just a writer to drill down into one particular product/service. If you’ve an agency with different skillsets, ‘niching’ definitely makes sense – why wouldn’t it? That’s not to say, as a freelancer, I don’t explore, research and plan every project I work on meticulously to make it specifically unique to that niche.

What are your favourite copywriting books?

That’s easy – partly as I’ve only read a handful. But there’s one I’ve read twice, ‘Hey Whipple, Squeeze This’ by Luke Sullivan. It’s a bit dated now (1998) but makes so much sense. In fact, if you weren’t a copywriter and read this you’d probably want to be a copywriter.

My second favourite copywriting book, and one I still use for reference, is ‘Read Me’ by Roger Horberry and Gyles Lingwood. It’s beautifully and simply formatted, too.

My third favourite would have to be a book that isn’t strictly about copywriting, but writing as a whole. And any great copywriter will learn a lot from ‘On Writing’ by Stephen King. No, it’s not scary. Sadly.

How do you drum up work?

With great difficulty, persistence and persuasion.

What was your finest hour?

This is a weird one. Because at the time I thought nothing of it. But, in retrospect, creating the art-deco branding for Edinburgh Gin is the work I’m most proud of. It started as a relatively unheard-of gin and now, as we all know, it’s massive. Made even more so by Glasgow’s Bright Signals’ fantastic TV ad.

A few. But the one that stands out is losing the RBS WorldPay account at Clayton Graham Communications. And because of that the company went bust and I found myself redundant. Some of the best pitch work I’ve ever known came out of that place – but it obviously wasn’t good enough. How fickle our industry can be.

What was the last book you read?

‘Columbine’. I’m fascinated by horror, serial killers and all things gore. This book was a brilliant read – you learnt a lot more from it than that Michael Moore documentary.

What did you have for breakfast?

Coco Pops and a banana. Washed down with four cups of Rooibos.

What tips would you give a copywriting newbie?

It depends on your age. If you’re a spring chicken, I’d do anything and everything I could to get a copywriter role at a good ad/design agency. That’s where you learn the ropes and a whole lot more – and if that means working as an intern on a minimal wage, do it.

Many copywriters will disagree with me on this one – but you don’t need to be great with grammar or even spelling to be a top-notch writer. Of course, it helps. But what matters most is your passion and ideas. The world’s best campaigns don’t come from idea-less English grads. And be prepared for long hours, shitloads of criticism and difficult clients.

Speaking of clients – any tips for dealing with them?

Hey, the client is always right. Just don’t let them take the piss. You are the creative after all.