From false starts to a roaring finish, freelance copywriter Nigel Graber is the lost cause who cleaned up in quirky copywriting. I was a success in the end, Mum. 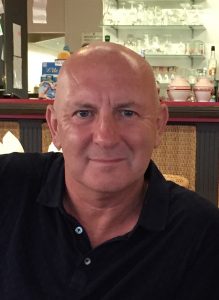 Until I discovered this ‘crazy game’ in my late 20s, I’d known nothing but resounding failure. Then I accidentally fell into the Public Relations Department of Oxford Regional Health Authority.

I’d had yet another false start working for local NHS in HR. When I resigned in a well of despair, they kindly sent me up to Oxford to swap HR for PR.

At the same time, I paid my own way on the Communications, Advertising and Marketing (CAM) Foundation Diploma in London. These were my last pennies and this was my final shot.

I’d leave my Windsor flat at 5am to catch the first train to the dreaming spires, shoot off early to make the London train for my thrice-weekly night class at the Barbican, then run flat out for the twilight service out of Paddington. British Rail loved me.

Those were the hard yards and the long days. Sometimes I barely ate. But my back was against the wall. I had no muscle memory for success. But finally, at London’s Barbican, I was a straight-A student for the first time.

Mental. What did you do before all that?

I’d always wanted to be a journalist, but gradually realised it became a more and more ugly profession the higher up the ladder you got. But I had no idea I could write commercially in any other way.

What’s all this about tennis?

Yeah, it’s kind of a lost career. If only I’d seen the light, I could have put two and two together and done a sports-journalism degree. That would have scratched two itches. But my head was a horrible mess in those days.

I do have a bit of a side hustle, though. I’ve written about tennis for The Bleacher Report, for tennis.com and for an Andy Murray fan site. I’ve also appeared many times on BBC radio as a tennis pundit. Here’s a sample. My kids play a drinking game based on the ‘erms’. Today, I also have one or two tennis-copywriting clients.

Bizarrely, at my advanced age, I’ve been made captain of my tennis club’s first team. Yeah, I always get there in the end.

Another grim confession. I don’t actually read very much. And I’m totally not a liberal-left artsy person. My head’s way more likely to be in the sports pages of the Daily Telegraph than in the arts section of The Guardian.

That said, I can recommend Influence by Robert Cialdini (although I could have written it in 30 pages) and Luke Sullivan’s Hey Whipple, Squeeze This. Bill Bryson’s Troublesome Words will help you really nail grammar.

How do you spend your spare time?

I love writing radio ads. I’m a quirky bugger and radio spots lend themselves to humour. You can hear some radio-copywriting samples here. One of those ads caused a massive traffic jam in an Irish village. Sadly, most stations have their own in-house teams these days.

What was your finest hour?

In the noughties, my entire life was given over to writing quirky, Innocent Drinks-style copy. I won three awards in three months.

One day, my phone rang. It was Danny, the copywriter from Innocent. He told me he bloody loved my copy and would I like to write for Innocent?

Obviously, I said no as I was far too busy.

The hell I did.

There was also a £4m sales letter that set my client up for life. And another highlight was writing regularly for Islam’s biggest pop star. This guy has sung live in front of 250,000 in Taksim Square in Istanbul… and to me, one-on-one down the phone. I dribbled a bit.

Apart from all that, working with GROHE out in Dusseldorf was fun.

Why the quirky copy?

Dunno. Guess someone had to do it and my humour has always been on the sur side of real. As a kid, I’d write Python-style comedy sketches and perform them in front of the school.

Before starting out as a freelance, I also wrote a humorous blog that grew a cult following and won awards in The Guardian and Web User magazine. If you’re feeling stalky, you’ll still find it.

I was watching a documentary about Everest and it got me thinking. You can climb the world’s highest mountain, sail the Atlantic single-handedly or swim the Channel.

These feats are amazing. But they’ve all been done before. As a copywriter, you get to create something unique every day. That’s magical. And you don’t need crampons.

What’s the best thing about freelancing?

The free bit. Lancing I can take or leave.

I agree. Any advice for newbie copywriters?

Ooh, that’s harsh, but probably fair. Any advice for clients?

Yeah, please don’t contact me if you’re gonna approve by committee, go through 11 drafts or batter me down on price. Especially if the evening session at Melbourne Park is about to get under way.