He attracts the best job titles. He gets to talk about copywriting all day at the University of Lincoln. He writes copy at the weekend. And he’s got a new book out. Meet lucky bugger Andrew Boulton. 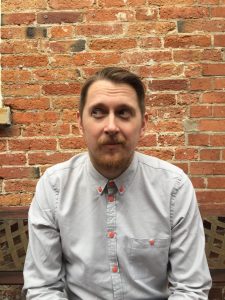 The only honest way there is: entirely by accident. I jest – because ad courses (like the one I’ve also entirely accidentally ended up teaching on) are an amazing way to find your path into writing with far more skill and knowledge and self-belief than I had.

The only thing I had going for me in those days was that I had two certainties in an ocean of obliviousness – one, that I loved writing, and two that I wasn’t built for a grown-up job.

A series of incredibly happy accidents took me into my first job and I’ve been clinging frantically to the back of the copy pony ever since.

For the briefest of times, while travelling in Australia (gap year wanker) I got a job plucking an invasive weed from marshland for the Victoria water board – and to do the job you had to wear massive, industrial gauntlets to protect from tiger snake bites.

I tell this story simply to illustrate that, had I not found copywriting, I would have worked in a job that would have killed me, either quickly and dramatically, or slowly and miserably. I’m a lucky boy and, in case you’re wondering, a disappointing snake wrangler.

Looking back at your work history, I was wondering how you got a job title like Digital Conversations Manager?

Honest answer is that I made an enormous mistake! I had grown really tired of agency life and, having picked up some embarrassingly flimsy social media knowledge, wondered if that might be my last chance to see if I was ready for a grown-up job. I wasn’t.

People-wise, it was one of the happiest places I ever worked and I made some really good mates. But I wasn’t writing, I wasn’t creating and without that I have absolutely nothing at all to offer. I introduced a couple of the PR team to Pop Up Pirate, but that’s about it.

How do you think social media has evolved since then (2014)?

I’m delighted to say it’s evolved beyond my comprehension – and it’s honestly a relief not to have to pretend my knowledge is up to date. It’s a terrible old creative cliché (and therefore also very true) to say we get too wrapped up in the medium.

Social media should be seen as nothing grander than a creative’s deferential bitch. It’s there to carry your amazing idea, and too often we mistake it for the idea itself.

I don’t believe in decrying the pernicious influence of social any more than I would celebrate a social utopia of connectedness and sharing – both are true, both are impostors and both are distractions from the fact that human beings are where our attention should be aimed.

And then you were Language Lead at True Story. You win on job titles. Tell us more.

Ha! I would kill to simply be called a copywriter, but alas my CV reads far wankier than my actual career has been (honestly). In fairness to True Story – who are an amazing creative agency by the way, one of the very few I’ve worked for that take copywriting really seriously – my job was essentially Head of Copy.

The only thing I get more stick from on LinkedIn than being a ‘Language Lead’ is looking like a fat Ricky Wilson. Crosses to bear and all that.

You’ve been freelance since 2018. What do you like about it?

I’m in a pretty unique (and incredibly fortunate) position as my day job is teaching copywriting and creative thinking on an amazing course at the University of Lincoln. But, with a bit of sacrifice to my evenings and weekends, I’ve been able to maintain a handful of freelance clients as well. And I wouldn’t have it any other way.

If I spent even a few months away from the actual business of writing and creating ads, I’d be a shitter teacher. One doesn’t exist without the other, so I’m happy to say I’ve got a balance that works for me really well.

I sound like a self-satisfied prick if I say no, so I’ll just say that, sometimes, you get to the end of the day and realise all you’ve done is type and eat Hula Hoops.

This is doing absolutely no good for my tortured-writer façade, but lots of happy times, really. I’ve been working with an agency in Madrid called Officer and Gentleman (shout out) for the last year or so and the stuff I do with them is some of the most creatively interesting and fulfilling.

It helps also that they’re excellent people, and I think I’ve finally learned to pick a project based on the folk you’re working for, and absolutely nothing else. I like the mix to be honest – and I reckon I’ve always felt more at home in the small and the strange than high-profile work.

From the outside, the huge brands and the big budgets and the award-bait lure you in, but the stuff like that I’ve worked on has felt, strangely, like creativity is a bit side-lined by all the other considerations and voices that go with it.

I don’t want to be a tiny part of a huge process – and I certainly don’t want my name to be 30th on the list of credits for an idea! Give me small, strange – and a bit more of a creative say in where it goes – every time.

So tell me about the day job. How did you get into lecturing?

As I mentioned, it was another classic bumbling into something. My good pal, Captain Dave Pettitt, left the agency we were both at to go and lead the Creative Advertising programme at Lincoln Uni and got me in to do a few sessions on copywriting. And, irritatingly, I found it really rewarding to actually pass on some of the stuff I’ve learned to a bunch of really talented, really engaged students.

Then, when the chance came to join the team full time, I was again at a point where the agency grind had lost its shine so I gave it a go and have had a marvellous old time ever since.

There’s a lot of teachery things I need to do, like planning and admin and filling in mark sheets, which I’m absolute shite at. But I was shite at all the admin stuff a creative has to do in an agency, so it’s not an enormous change of affairs.

Would you rather teach or write?

Both – but I feel like this is one of those gun-to-the-head questions, so I have to say write. I would miss teaching if I didn’t have it, but I could still function as a pretend-human being. I couldn’t do that if I wasn’t writing something.

Do you see much talent coming through?

It’s scary how much talent there is – and it makes me really anxious about all the talent that must be slipping through the cracks, because they don’t know about the role of copywriter specifically, or the paths that take you there.

A lot of old-school ad creatives are a little down on teaching what we do at uni – and, in fairness, I think it’s coming from a good place, where they’re living proof of working and growing on the job. But I do genuinely believe that we’re setting these young creatives up to be happy and successful in the industry.

If I thought for a second we were churning out cookie-cutter, textbook creatives, I’d knock it on the head in an instant. But what a course like ours does is help a young person find out what kind of creative they really are – not obediently dress up like the one we’re telling them to be.

How has lockdown been for you?

How do you drum up work?

I’ve been entirely converted to the joys of LinkedIn. Yes, there’s an enormous amount of bullshit on there, but also a huge community of people who want to see silly creative stuff without having to actually learn anything important.

So I’ve started to focus my energy on just messing around with words on LinkedIn and it’s been oddly rewarding in terms of new clients, new gigs and – more importantly – chatting to new people I really like and admire. The only downside is that I get told off quite a bit on LinkedIn for my language – it’s a little bit more delicate than other social media platforms in that respect.

The students on my course get my standard list of excellent copy books drummed into them on a daily basis. Read Me (by a wonderful chap I actually know, Gyles Lingwood) is still as good a practical copywriting guide as I’ve ever read.

Steve Harrison writes so compellingly about copywriting, it’s an easy way to get people to fall in love with the life. But there are so many excellent books about the craft of writing that, I think, teach young copywriters about the beauty and persuasive potential of words and stories.

Ray Bradbury’s Zen in the Art of Writing is hypnotising, and I have to revisit it at least once a year. Also, if you’ve never lost yourself for a few dozen hours in the Paris Review Interviews then you are in for a blissful writing experience. Oh, and Junior by Thomas Kemeny is a genuine game changer.

And, of course, it’s plug time. Tell me about your new book, ‘Copywriting is…’.

Some say ‘Copywriting is…’ is one of the most important copywriting books with a yellow cover ever written. It was one of those things where I had to have a frank conversation with my own laziness about what we were, and were not, capable of doing together.

We were, it seems, unable to fashion any kind of useful practical guide to how to be a copywriter. But we could put together a little window into what life as a copywriter is like – the ups, downs, challenges, rewards and all of that good and peculiar stuff.

I owe an enormous thanks to The Drum, especially the now all-powerful Cam Clarke, who have indulged my copy-based ramblings on their website for years now – and to Giles Edwards, my publisher and new favourite uncle, at Gasp! who basically shovelled my untidy ramblings into a genuinely beautiful book that is out there in the real world.

Vikki Ross CBE (Copy Boss Extraordinaire) described it as ‘a love letter to copywriting’ and it’s annoying that she wrote a far better way of describing it than I managed to.

Why’s it different to all the other copywriting books out there?

It’s mine. It’s what I’ve seen and felt about copywriting over all these years I’ve been doing it, teaching it and, frankly, obsessing over it. It’s a pretty strange and unhealthy relationship, and I don’t try and make sense of the oddities or contradictions of doing it.

I think, if you’re already a writer, it makes you feel like someone else has felt the things you feel, for better or worse. For new writers or copy students, I hope it’s an invitation to join a life that is, for all its many flaws and eccentricities, pretty much the most stimulating and rewarding job you can do in writing.

And finally, what do you do for breakfast?

I eat pencils. HBs for starter, 2Bs for pudding. Breakfast of alphabetical champions.