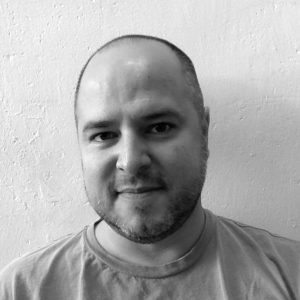 Like everyone else—by accident. I graduated with a degree in creative writing and began writing books and searching for agents.

After a year, my dad informed me that I needed to get a real job.

At the time, one of my friends was a copywriter at an advertising agency in Cleveland. He said, “This is so easy, even you could probably do it.”

What would you have been in another life?

Have you ever been shocked by a wall socket? It feels like that, only stronger and longer. Luckily it wasn’t a direct strike, but a side flash or a ground current. My mom, grandma, and I were driving through rural North Carolina, on our way to a family vacation.

It was raining so hard, we couldn’t see the highway, so my mom exited to a service station. I was pumping gas on an old pump with metal hosing and analog dials when lightning struck nearby. Everything around me lit up like a flashbulb; the charge came through the pump handle.

At first, I couldn’t feel my arm from beneath the elbow. But after a few minutes, everything started coming back. The running joke of our vacation was that nobody would sit next to me.

So it all began at McCann, eh? Tell me about that.

I had moved out to San Francisco without a job, friends, or family. I stayed in youth hostels and campgrounds for two months until a CD at McCann took pity on me and offered me a position.

I had worked in a small Cleveland agency prior to this, but McCann was my first real job in advertising. I loved everything about it. The big clients, the big budgets, and big productions. So many bright, funny, talented people. And easily my favorite commute: hanging off a cable car as we rode up and down the hills of San Francisco.

Then JWT. Any highlights there?

Living in Seattle was the greatest highlight. Everyone thinks it rains a lot in Seattle, and that is correct. But when the weather IS nice, people don’t go into work and don’t bother calling in sick. They just venture outside to explore the gorgeous scenery around them. At least, that was my experience. Maybe I should’ve called somebody.

And just three months at MTV. Did you not like the coffee?

I loved the coffee. It was the whole ‘Your show has been cancelled’ that I disagreed with. We created 13 episodes of an animated comedy called ‘3-South’. The show was about three college roommates; two of them were the dumbest students on campus. After ten weeks, MTV removed it from the lineup.

What does an Executive Creative Director do?

Great question. I was hired to be ECD at age 35, only to spend the next two or three years trying to figure out what exactly that meant. I called other CDs from agencies I admired and said, ‘Hey, what the heck do we do?’ They helped me determine: an Executive Creative Director inspires everyone to appreciate great advertising, defines creative excellence for that agency, takes the bullets for the team, and nurtures creative superstars.

And what’s this about the Winter Olympics?

The most memorable moment of my career was attending the 2010 Winter Olympics on behalf of our vitaminwater client. I had never been to an Olympics before, but soon realized it’s a two-week long, boisterous, cosmopolitan, rocking, euphoric party in the streets. There may have been advertising involved at some point, but I wasn’t really paying attention.

Tell me about your self-published novel.

I’d written four previous books and had grown tired of the traditional publishing process. So for the fifth, I hired a designer and photographer to create the cover artwork and I did the rest on my own, including promotion and distribution. ‘Jimmy Lagowski Saves the World’ ended up getting rave reviews from Publisher’s Weekly, the Midwest Book Review, the Akron Beacon Journal, and more. Best of all, agents began calling me, which was a nice turn of events.

You’ve done some other fiction, yes?

Fiction, non-fiction, short stories, humor articles, screenplays, TV scripts, other stuff I can’t think of right now. Most recently, I wrote a personal essay about my mom dying from COVID. It helped me get through a difficult time.

Sorry to hear that. Do you prefer creative direction or pure writing?

If we’re talking advertising, I prefer creative direction. Unfortunately, that job market is a lot tougher right now. People wait in line for decades to get a CD position. Rarely does something open up to the outside world, and when it does, there’s usually a reason.

Where do you think copywriting is heading?

Same place most skills are heading—into the shitter. Regardless of the industry, wisdom, nuance, and craftsmanship are disappearing at an alarming rate. Younger generations don’t need sage advice when they can just ask Google.

I think social media began in the right place—connecting people around the world with similar interests. However, in the race to become the largest, platforms have lost sight of their intentions.

Algorithms designed to increase users and screen-time succeed by regurgitating content to people based on what they’ve previously aligned with. So really, all social media does these days is fossilize someone’s existing beliefs and create a false sense of superiority.

The terms ‘us’ and ‘them’ have never been further apart. But to answer your question, probably cat videos would be my favorite.

Which creative execution would you give your left arm to have come up with?

‘What will your verse be?’ by some computer company you’ve probably never heard of. This was the most powerful and exact explanation of why human beings are creative.

How do you get inspired?

I go to the library or walk through the park. Both are silent excursions. There is nothing more inspiring to me than complete silence.

Can you recommend any books on creativity?

Luke Sullivan’s ‘Hey Whipple, Squeeze This’ is still my bible for copywriting and creativity in advertising. I also enjoyed Teresa Iezzi’s ‘The Idea Writers’, and Gary Vaynerchuk’s ‘Jab Jab Jab Right Hook’. For pure writing purposes, I recommend Stephen King’s ‘On Writing’. And for selling purposes, I can’t say enough about Cialdini’s ‘Pre-Suasion’.

Probably wearing a colored vest, roaming the aisles of a superstore like Home Depot, and pointing in the wrong direction when people stop to ask me a question.

Most days I scramble two eggs with fried kimchi and smoked ham. Then I add a toasted English muffin with butter and apricot jam or apple butter. Wash it all down with a small glass of Powerade Zero (blue). And a half-dozen medications.