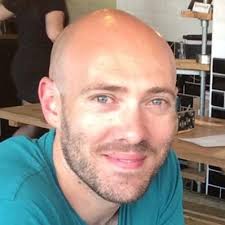 I started freelancing as a translator in 2009, in my final year of uni. By 2011 I was doing it full time – translating copy into English for FIFA, Renault Sport and other sports brands.

For a sport-mad language nut, it was the dream. But after a couple of years, I found I enjoyed selling myself to clients more than I enjoyed doing the actual work they’d paid for.

Writing a long sales email and seeing the responses roll in, or tinkering with my website copy and watching conversions rise – it was exciting.

So I got interested in direct-response copywriting and read everything I could get my hands on. And I became obsessed with advertising, the creative greats and the craft of it all.

I found it all so fascinating, and it convinced me to throw everything at making copywriting my career. And that’s what I’ve managed to do.

I recently left a senior agency role, where I co-led a team of six writers, and I started my second stint of freelancing in January.

What’s your favourite type of client?

The kind with something complex to sell or communicate.

Stripping back, simplifying and making things more human is what I’m best at. And it’s so satisfying when I can use those skills to help clients shift more stuff.

Do you remember those ask-me-anything SMS services that used to be popular before Google exploded? I wrote for one of those for a while.

People would text in any question imaginable, and I had to answer as accurately as possible – always with a witty extra thrown in. And all in the space of a single text message.

You’d see everything from, ‘Why isn’t Darren picking up his phone?’ to ‘Where can I buy a onesie for my horse near Royal Wootton Bassett on a Sunday?’.

But the one I’ll always remember: ‘What does a bird’s penis look like?’. Not so much for the question itself, but because it was followed by the same one for pretty much every other member of the animal kingdom without discernible genitalia.

That was one of the weirder days of my career. And I still wince to think what it must have done to the guy’s phone bill.

In 2011, I got sent out to Paris to work at a women’s tennis tournament. I was the lead translator and editor for the English version of the official website.

All very glamorous. Until I got to the venue and found out where I’d be working.

It was a converted men’s toilet. And my seat was directly underneath an open pipe that infused the room with the heady aroma of turd.

About 15 people and their laptops were crammed in the room, making the heat and stench close to unbearable. Twelve hours a day for a whole week.

But the client liked my work, and I met Kim Clijsters. So it wasn’t all bad.

I’d have been a cartoonist. I used to get the Dandy every week when I was a kid, and I’d spend hours recreating the strips in there.

I loved drawing and I still regret not doing more with it. I’ve got back into it since my son was born, though, so maybe it’s not too late.

Any tips for newbie writers?

1 Find a mentor. By that I mean a copywriter whose work you particularly admire.

Read everything you can about them, their career and their process. Study their work, pick it apart, look at the techniques they use. And apply what you learn to your own writing. This has helped me a lot.

2 Learn how to take difficult feedback. This can be tough, and it’s something I’ve had to work on in the past.

These days I see it like this: the moment the words leave my brain, hit the page and go to the client, they’re not mine anymore. They exist to serve the brief. And my job is to make sure they do.

When you separate yourself from your copy in this way, it’s easier to see critical feedback as an attempt to improve the work – and not as a personal attack.

3 Network – even if the very idea gives you the wiggins.

I ended my first stint of freelancing in 2014, not through a lack of business but because I’d cut myself off from the world. I thought I could do everything myself, which was a silly mistake, and the isolation eventually won.

I realise now that a big circle of good people is the most valuable thing you can have as a freelancer. Knowing you can message someone if you’re having a bad week, or send them work if you’re snowed under – it’s so important.

The best place to start is Vikki Ross’s #copywritersunite meet-ups. They happen across the country (I organise one in Brighton) and they’re great. No tickets, no speakers and no agenda. Just drinks in a pub with word-loving creatives. Bliss.

Any tips for clients?

Learn how to give good feedback.

Bad feedback is stuff like: “I don’t like this,” “This doesn’t feel right,” or even “This is all amazing!”.

It’s bad because it’s subjective and it doesn’t answer “Why?”. Without that, there’s nothing concrete the writer can do to make the copy better, and nothing they can learn for next time.

Good feedback is “This works because …” and “This doesn’t work because …”. It’s good because it brings everything back to the brief. And it makes it much easier for the writer to jump in and fix things.

David Abbott. Not only for his writing, but because in an era inhabited by some pretty unpleasant characters, he stands out as someone who did things with integrity and treated people the right way.

The Copy Book. A great one to keep on your desk and flick through when you need inspiration.

What’s the last book you read?

What do you have for breakfast?

An espresso and two bits of toast. And whatever’s left on my three-year-old’s plate.